The Journey of Archbishop Samuel and the Dead Sea Scrolls 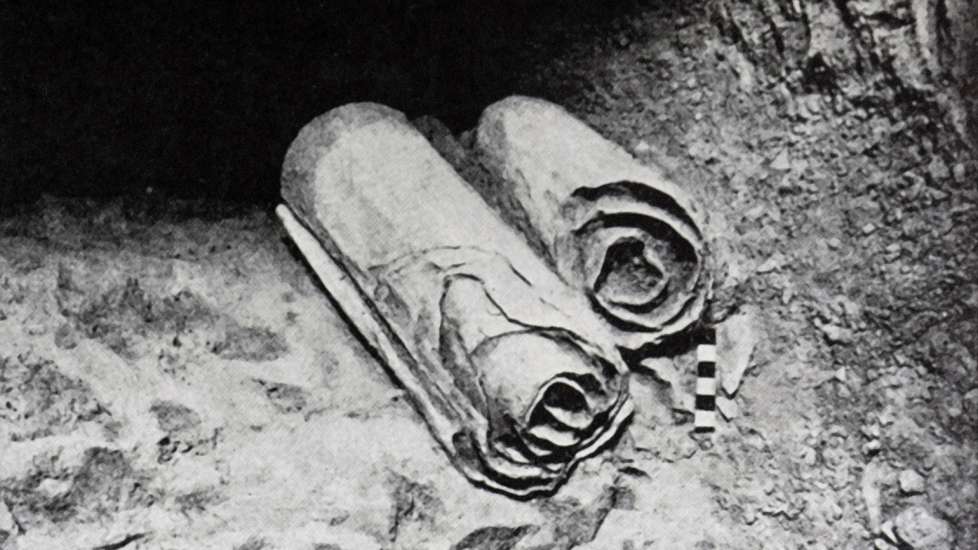 A famous Middle Eastern archbishop changed the biblical world as we know it by safeguarding the famous Dead Sea Scrolls.

I first heard the story from my mom when I was a kid. About the tall, Aramaic-speaking archbishop from the Middle East. Athanasius Yeshue Samuel, or Mar Samuel, as he was often called. A man who came to the United States in January 1949 with four scrolls in his suitcase. Scrolls that would change the world.

He first caught wind of the scrolls in Jerusalem in 1947. How Archbishop Samuel had ended up in the Holy Land is itself the stuff of legend. He was born in Syria in 1907. During the Armenian Genocide, he became separated from his family. He ended up stranded on the side of a dirt road, weak and feverish. A priest found him and brought him to safety. According to Father John Meno, who served as Archbishop Samuel’s secretary in the U.S. for 25 years, “after that, he couldn’t help but feel in his heart that God had something in mind for him.”

That something is what led Samuel to Jerusalem. After he reunited with his mother, in 1917, she recounted a promise she’d made to God. That if she ever found her son alive, she would take him to Jesus’ homeland. She kept that promise. Samuel eventually became the archbishop of Jerusalem, residing at St. Mark’s Syrian Orthodox Monastery, the very site where the Last Supper is thought to have taken place.

It was there in the monastery, in early 1947, that he was approached by an antiquities dealer from Bethlehem named Kando. As the two sat drinking Turkish coffee, Kando pulled a newspaper-wrapped package from his robe and launched into a strange tale. About a Bedouin shepherd boy who’d been herding his goats off the northwest shore of the Dead Sea, in an area known as Qumran.

One of the goats wandered off. The boy, fearing the goat had fallen into a nearby cave, tossed a stone through the cave’s opening. Instead of a goat’s cry, he heard the sound of pottery shattering. The boy returned days later to investigate, bringing other members of his tribe with him, and found several cloth-wrapped scrolls carefully preserved inside tall, narrow clay pots.

Kando was hoping the archbishop would be able to decipher the scroll inside the newspaper-wrapped package, a scroll he assumed had been written in Aramaic. The moment Archbishop Samuel unrolled the package, it was as if the earth stopped spinning, says Father Meno. The scroll was written on animal skin and presumably very old. The text was Hebrew, however, not Aramaic.

Archbishop Samuel couldn’t read Hebrew. Yet he couldn’t deny there was something about the scroll. Something he felt compelled to protect. “He knew it wasn’t just an old document,” Father Meno says. “It was of great importance. And that God, in his divine providence, had brought it into his hands.”

Archbishop Samuel offered to purchase the scroll, as well as the others the shepherd boy had found. Kando wondered aloud what on earth the archbishop would do with scrolls he couldn’t even read. “I do not know yet,” the archbishop replied. “But I wish to buy them nonetheless.”

Strengthen Your Faith with Free eBooks on Prayer, Bible Study and More

He bought four of the scrolls. Archbishop Samuel showed them to one expert after another. Each one told him that his intuition about the scrolls was wrong. “Your Grace, you have a romantic imagination,” a concerned member of his congregation told him. “Bedouins are forever finding ancient things in the desert and passing them on to… gullible buyers.”

Still, Archbishop Samuel’s inexplicable feeling about the scrolls didn’t fade. “To find words to explain the intangible certitude that persisted within me was impossible,” he later wrote in his autobiography. “Intuition is a precarious framework for fact.”

Months passed. Finally, in 1948, John C. Trever, an American Biblical scholar, confirmed that one of the scrolls was the Book of Isaiah and sent photos of the scrolls to William F. Albright, an expert at Johns Hopkins University. On March 15, 1948, Albright authenticated the scrolls as “the greatest manuscript discovery of modern times,” dating them to before the birth of Christ.

Meanwhile, tensions between the Jews and Palestinians in the Holy Land were ramping up. Archbishop Samuel sent the scrolls to Beirut, Lebanon, where they were kept safe in a bank vault. Just in time too. Shortly afterward, his monastery in Jerusalem, St. Mark’s, sustained damage from the fighting. Archbishop Samuel was sent to the United States to raise money for the refugees in the Holy Land and to help build the fledgling Syriac Orthodox church in North America. He picked up the scrolls in Beirut and headed for the U.S. with the ancient treasure in his suitcase.

He hadn’t been planning on staying in America for good. But the Syriac community there was in desperate need. At the same time, Archbishop Samuel had come under fire for bringing the scrolls into the U.S. “He had a decision to make,” Father Meno says. “And he made what he believed to be, in God’s guidance, the right one.”

On June 1, 1954, an advertisement appeared in The Wall Street Journal, under miscellaneous items for sale: “Biblical Manuscripts dating back to at least 200 BC.”A month later, the archbishop traveled to the Waldorf-Astoria in New York City and sold the scrolls to an American buyer for $250,000. It was only later that he discovered the buyer was actually working on behalf of the Israeli government. The four scrolls ultimately ended up back in the Holy Land, right where their journey had started.

Those four scrolls, and the many more that would eventually be discovered in the caves of Qumran, changed the Biblical and scholarly world as we know it. Archbishop Samuel is sometimes an overlooked figure in that story. Forgotten to some, but not to me.

It was Archbishop Samuel who picked up my uncle Jack from Pier 42 in Manhattan when he first arrived from Turkey in 1963. And invited my father for weekly dinners at his home in New Jersey after he immigrated in 1965. The archbishop also married my parents in 1971. Until his death in 1995, he supported an entire community of believers in the U.S. and abroad, many of whom were victims of religious persecution.

Thanks in part to funds provided by four scrolls that had found their way to a man who had himself suffered the horrors of genocide. A man compelled to safeguard the gift God had sent his way. A man I’ll always remember as the protector of the Dead Sea Scrolls.

The Bedouin shepherd, who belonged to the Ta’amireh tribe, had been looking for a lost goat when he came across the cave in Qumran. He assumed his goat had gotten stuck inside. So he tossed a rock in the cave’s narrow opening to see if the goat would respond. To his surprise, the sound of pottery shattering echoed out instead. He returned days later with others in his tribe and found tall, clay jars inside the cave.