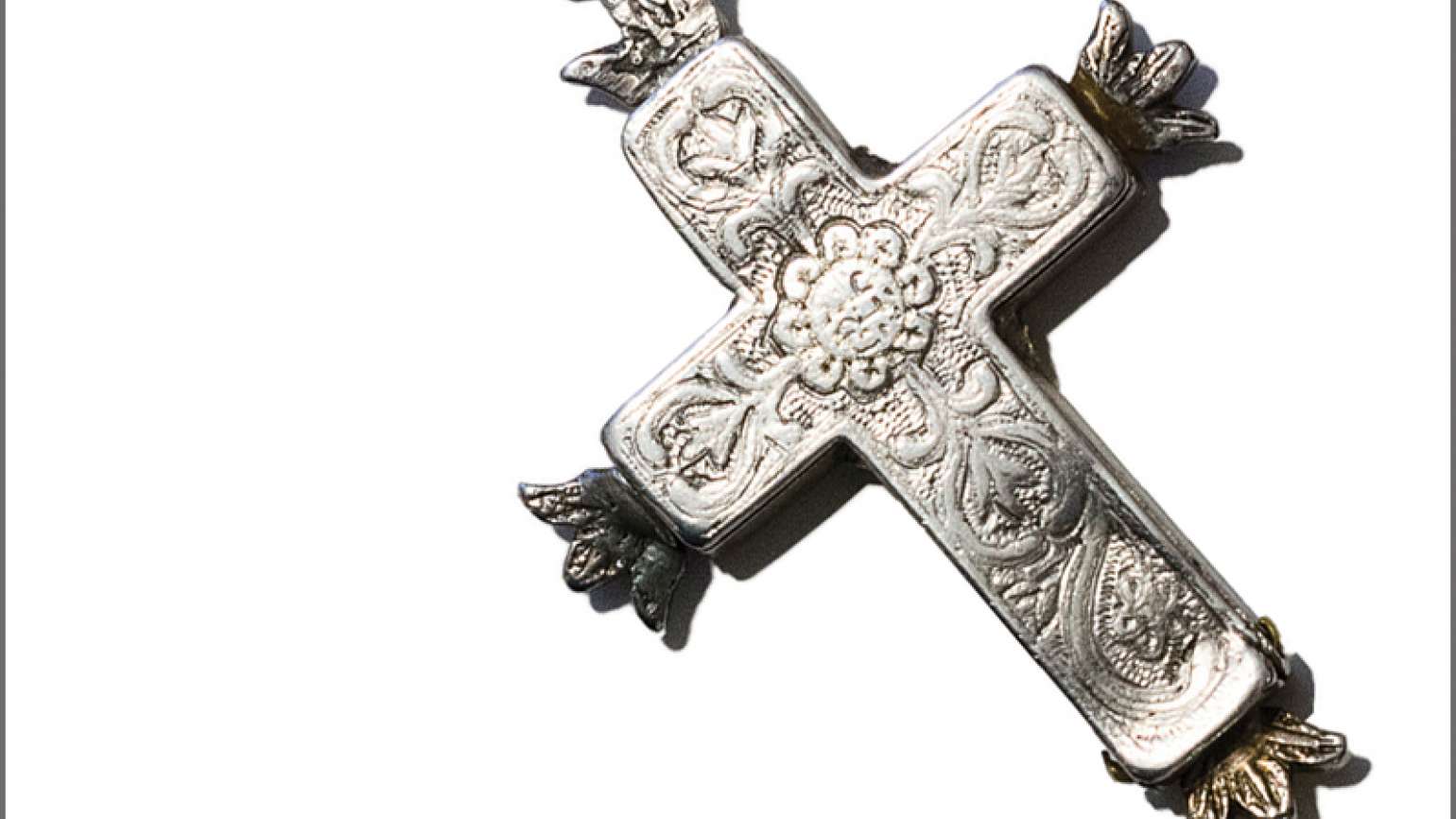 A beloved treasure is returned to her family after a separation of many years–and miles.

Today the cross sits inside a display case in Vienna, Austria. But for many years it had a much humbler home. Sewn carefully underneath the silk lining of my dad’s wool blazer, below the left pocket.

Back in 1962, he was a teenager in southeastern Turkey about to embark on his first real journey away from home, to attend high school six hours away, in the city of Diyarbakir.

It was no ordinary cross. For centuries, the Aydins had been known as “the family of priests” in their small town. The cross was a cherished heirloom; the top opened to reveal a hollow chamber where a sliver from the Holy Rood, Christ’s original cross, was said to have once been kept.

By the time the cross reached my dad, it had survived two world wars, revolutions and the genocide during which two million Armenians and other Christian minorities were forced from their historic homeland in Turkey.

Growing up, he’d watched his father–a priest in the Syriac Orthodox Church–use it to bless parishioners every Sunday. He couldn’t believe it when, the night before he left for school, his mother showed him how she’d sewn it into his freshly pressed jacket.

After all, he wasn’t a priest, or even planning to become one.

“It will protect you,” his mother said. She didn’t need to explain why. He’d won a scholarship to attend one of Diyarbakir’s most prestigious high schools. But among thousands of students, he would be the only Christian.

He quickly became a target. His classmates called him names. It took him a long time to make friends. The city was violent too. One day during his first semester, he witnessed a murder on his way home from the library.

Yet the cross protected him, just as his mother promised. He grew accustomed to the extra weight on the left side of his jacket. Whenever he was nervous or about to take a test, he would touch the spot where the cross was concealed, close to his heart.

He made it to the top of his class and planned to take the cross with him on his next journey–to America for college.

Then one day, just before graduation, he returned to his dorm and found the door of his locker hanging open, the lock broken on the floor. Frantic, he pulled his jacket out. The lining was ripped. The cross was gone.

My dad was devastated. The whole family was. Except my grandfather, who took a more philosophical view. “Someone else must have needed its protection,” he said. Perhaps another priest. Not one of his seven sons had entered the priesthood–the line of clergymen ended with him.

My dad moved to the United States and started college. He became an engineer, married and settled down in New York. Most of his family stayed in Turkey, moving across the Bosporus to Istanbul, on the other side of the country from Diyarbakir.

His oldest brother, Sabo, opened a jewelry shop in Istanbul’s famous Grand Bazaar, the world’s oldest mall, spread out over a warren of more than 60 streets. Thousands of shops and stalls, brimming with handwoven rugs, jewel-colored lanterns, dazzling silks and every kind of spice imaginable.

Most days, Sabo entered the bazaar through the South Gate, closest to his shop.

One spring morning in 1974, he took a different route and entered the bazaar by the North Gate. Sabo walked through the covered market, ignoring the vendors clamoring for his attention–“A good price for you, sir!” “Fresh baklava!”–then stopped.

Something glimmered in the window of a quiet little antique shop.

“Where did you get that silver cross?” Sabo asked the shopkeeper.

Sabo picked it up, wiping away the dust. He found the little loop at its end and lifted the top, revealing the hidden chamber. There was no mistaking it. The Aydin family cross!

“I’ll give you a good price,” the shopkeeper said. “You’re the first person to even ask.”

Sabo rushed out of the shop, the cross tucked safely in his jacket pocket. He couldn’t wait to tell his father. After 10 years, after a journey of nearly 1,000 miles, the cross had come back to the family of priests.

Right on time too. My dad’s cousin, and best friend, Emanuel, had just been ordained in Vienna. A priest in need of a cross. A very special cross, the Aydin cross.